You're only as old as people think you are

Today is my 36th birthday. Not too long ago, I probably wouldn't have told you my age--not because I thought I was old, but because its not much of an advantage to be a 36 year old CEO. But that's better than what I sometimes get when people guess that I'm 28 (on a completely vain level, bless them!) or 31 or some other younger age. While on some level it is a compliment, it also is invariably a hit to my credibility. Because unfortunately, whether we like it or not, we judge people's expertise in some part on their age.

I've been discredited for my age in client meetings, comments like "and all that before you were 25" after I gave my bio. I've seen others discredited or dismissed for their age, most recently keynote Jonah Lehrer at the Learning Solutions conference. And more subtly, you hear the tone of people's voices, see their body language, when some young whippersnapper comes on the scene and has an opinion or shows expertise.

So I'm 36, squarely in my mid 30s, and have been running my own company for 2 years after starting it (brilliantly) at the beginning of a recession. I have more than 15 years of experience in education and training, have my Master's degree, and wrote my thesis on technology in education and the need for media literacy in curriculum.  I've sold millions of dollars of project work in a year. I've managed a team of 16 people. I helped start a charter school. I've worked on both the client and vendor side, having started my career as a corporate training manager. I've been a teacher, I've been an instructional designer, I've been a project manager. I've spoke at conferences, and internationally. I'm a mom to 3 awesome kids.

And yes, I'm just turning 36 today. Its easy to dismiss someone because of their age or because they look young. Considering my role models are Mark Zuckerberg and these guys, I'm actually an old lady...

A few months back, we had a discussion in the office about what music we would have playing if we ever were a guest on a talk show. You know...what music would be your entrance music, what music would you have playing as you make your way across the stage, onto the field, or into the room. This song, this music, should represent you...make you feel something...inspire you. It should tell people something about who you are. It should make you want to dance...it should make Ellen get up and dance with you. 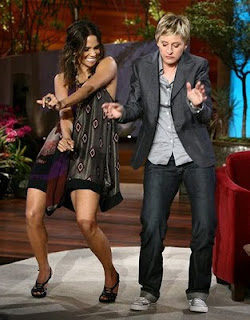 Sports teams have long used music, and theme songs, to fire up their players and the fans. In Cincinnati, Bengals players and fans know that Welcome to the Jungle by Guns N Roses signals the beginning of the game.  The Seattle Seahawks play The Verve's Bittersweet Symphony whenever they have something to celebrate, and the New England Patriots have a tradition of entering the field to Ozzy Osbourne's Crazy Train.

We all know that music activates a different part of the brain for memory and recall; its why stroke patients who lose the ability to speak can often sing fluently. Music helps us tie meaning to emotion and strengthens our social connection to others through shared understanding and experiences.

Our theme songs are not just who we are, but who we aspire to be. They show what makes us unique, provide a window into our personalities, and motivate us to get up and do things. Do big things. Do cool things. Do things that will make a difference.

As a little inspiration, here are some of the Tandem Learning members' theme songs...

Kristen Cromer: That's the Way I Like It, KC and the Sunshine Band

So what is your theme song?
Posted by Unknown at 3:22 PM 4 comments

After launching our second ARG for learning this week with our development partners Hybrid Learning, and after I pulled a double shift last week on #lrnchat talking ARGs (early and late transcripts), and I realized that a blog post about ARGs and how they can be used for learning is well overdue. Why should you be thinking about ARGs for your next event, or corporate learning initiative? Consider this tweet from Kristen Cromer regarding our pilot test results for our latest ARG: 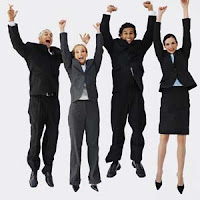 Client tester reacted to ARG test run by jumping up and down saying "I want to play more!"

So...when was the last time you launched a training program that made people jump up and down? Yeah...that's what I thought. The truth is, ARGs can incorporate many of the elements that traditional training lacks: social learning, experiential learning, game play, and competition. And...brace yourself...fun.

So what is an ARG? And how can you use them to help people learn?

Its difficult to make generalizations of what an ARG is or looks like for learning. Just as there are an unlimited number of games and rules for game play, the same is true for ARGs. Designs could range from something very simple (eg, a scavenger hunt) to something very complex (eg, large scale, problem-based learning leadership development). There are, however, some basic design principles and "lessons learned" that have become apparent as we have designed more and more ARGs for corporate learning.
We've launched two ARGs for learning in the last few months and are in process of developing two more. Corporate training initiatives and live events and conferences are great opportunities to leverage the strengths of ARGs at a comparatively low cost. How would you rather learn and network with your peers? What kind of shared experiences could an ARG provide as a basis for learning and relationship building? The possibilities and opportunities are endless.

Check out more information about our Constellation Academy of Wine National Sales Meeting ARG that launched this week here. I previously wrote a bit about our DevLearn 09 Zombie Apocalypse ARG here, and I'll be presenting the case study on both of these ARGs at the LEEF Conference in Harrisburg, PA on June 17th & 18th (and running an ARG for the conference as well!). I'll keep you updated on our upcoming ARGs as well. Stay tuned!
Posted by Unknown at 12:54 PM 3 comments