Last year, Tandem Learning had the honor of transitioning the ThinkBalm Innovation Community into the Tandem Learning Innovation Community (TLIC). The community was housed on LinkedIn and was in many ways a "closed community": you had to request to join, agree to the community rules, and then be approved by one of the moderators. Within the community, the goal was to talk about innovative technologies and their use for "serious" purposes, including business, education, etc. With membership over 500 members, it was a fairly large community and there was information being shared through member blogs and posts on a consistent basis.

One of the struggles for me with the TLIC was that it wasn't really integrated with the other social media tools I use consistently, namely Twitter and Facebook. Although it was beneficial to feel like there was a closed community that could share topics of mutual interest, I was "sharing" much more through my other social media accounts even when topics would have been of interest to the TLIC community. I suspect that other community members were doing the same.

Another struggle was with the idea of community participation and moderation. Of course we wanted as many people as were interested to join the community and I will freely admit that as long as someone said they agreed to our community "rules," they got in. But is it really up to just Tandem Learning to moderate the community? Or is it more effective for the community to self-moderate and Tandem Learning to step in when an issue is raised?

With the release of the "Open Group" option on LinkedIn, we needed to make a decision about the structure of TLIC and what it might mean for the future of the community. I want to be able to integrate our group communications with my other social media accounts and I want to connect to other members' accounts as well. I want to attract as many people as possible into our community to actively participate. And I trust the community of professionals that have joined us in the TLIC to let us know if something is happening in the community that needs to be addressed. Because of these reasons, we have decided to make TLIC an open group.

I welcome any feedback from our existing group members and I look forward to their continued participation. I also am looking forward to who our extended visibility may attract to participate in our community. I truly believe our community will be all the richer for becoming more open.
Posted by Unknown at 4:05 PM 0 comments

The girls in the back of the class

My first high school student teaching experience was in a 10th Grade Honors English classroom. I was in grad school, getting my Master's degree in Curriculum and Instruction and teacher certification all at the same time. I decided to use the 3 week lesson as one of my graduate research projects. I had no idea what I was going to study until my first day teaching.

I was doing a lot of research and writing at the time on gender roles and media literacy, and I had decided that one of the themes I'd be teaching to those 10th graders was on gender biases and stereotypes. I had a very idyllic vision of how this would play out...these 15 year olds would be SHOCKED at how the media was manipulating them to play out stereotypical gender roles and would be OUTRAGED at how they unknowingly reinforced these stereotypes through their own choices and behaviors. And once they were so enlightened, suddenly they would no longer allow themselves to be manipulated and bamboozled. 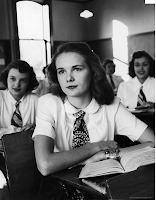 My first day of teaching, I noticed a group of girls in the back of the classroom. They were clearly the "popular" girls and they were clearly not impressed with me or anything I had to say. I had done a lot of work with teenagers before and I had this intrinsic belief that they all loved me. Day one and that belief was shattered. I left class that day reflecting on their eye-rolling, note-passing, giggling and whispering as evidence that I was not the charismatic superstar teacher that I walked in that day thinking I was. I suddenly felt very uncool. And strangely, I felt like I wanted these cool kids to like me.

Day two and I had a research project. I was on a mission! I would win these girls over and engage them in such moments of learning revelations that they would start passing notes to ME! But on this second day, I noticed something I hadn't noticed on the first day. These "cool kids" were actually ostracizing the other students. Their snarky comments were dismissive of the real learning and real reflection and real contributions of the other 20 kids in that class who were there to learn. Not only was this classroom backchannel interfering with my focus, but it was interfering with EVERYONE's focus. Some of the kids were so interested in being "accepted" by these girls that they were focusing on impressing them instead of focusing on the lesson. Some of the kids were so annoyed by these girls that they openly made snarky comments back in the hope of shutting them up. Some of the kids just wanted to stay out of the classroom power struggle. I started to think of these girls as learning bullies.

I left that second day with a real challenge for myself. How could I get ALL of these kids engaged and focused on learning? How could I get them to not only listen to me, but more importantly, to listen to each other? And how could I honestly address my own personal feelings of wanted to be accepted by the "cool kids" but honor the responsibility I had to all of these students as their teacher?

Day three and I decided to call these girls on their behavior. I separated them in class so they couldn't sit together. I was the strong arm of the law. Total failure...not only did the girls hate me...all of the kids hated me. I had totally disrupted the delicate social balance of their seating arrangement and everyone was annoyed. So much for forcing mixed groups and shaking up the status quo.

Day four...I was getting to the end of the first week. I had made very little progress in the battle with the girls in the back of the class. Ignoring them hadn't helped. Exerting my authority hadn't helped. I decided I just needed to focus on engaging them. After all...that was my job. I was the teacher. It was my job to facilitate learning, to respect each student's role in that process and to support them the best way I could. So day four...I handed the classroom over to the students. It turns out, they were much better teachers than me.

Days 5 - 15? At some point we all became the girls in the back of the class. No, it wasn't The Breakfast Club. But it was a learning environment where everyone was participating and the power dynamics were balanced and not residing with a small percentage of popular, snarky girls. 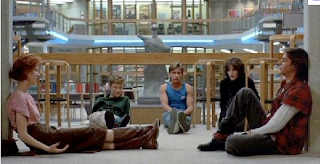 I will admit readily that I am a control freak and I like to think I can fix everything. But you can't control or fix learning...and you can't control or fix social dynamics. What you can do is provide an environment and opportunities for people to engage. Too often, we look at the cool kids or the backchannel or cliques and we start feeling those emotions that used to rise up when we were in 7th grade. The truth is, in some ways, we never leave junior high.

We're all adults now, but there are still social dynamics at play in our personal and professional interactions. We still need to think about the "cool kids" and the class clowns and the jocks and the goths (and evidently the emo kids? I haven't taught in a while...) and yes, the geeks. It doesn't work to reject a group's attitudes and opinions out of hand because it doesn't make them go away. It doesn't work to bully or name call or troll...that won't change people's behavior or opinions (if anything, it usually polarizes the situation). What works? Engaging people in the process and valuing what they bring to the experience, even if their attitudes and opinions are very different from your own.

We're all in this together.

And for those wondering, 15 year olds can get shocked and outraged when they realize how gender biased all of the toys they played with as little kids actually are. It's a joy to see teenage boys playing Barbie and teenage girls racing remote-controlled Batmobiles. Not that they would have admitted that after they walked out of the classroom that day... ;)
Posted by Unknown at 11:26 AM 5 comments

I've been one of the moderators for #lrnchat on Twitter for almost 2 years. Saying that amazes and humbles me...I've met more brilliant people and had the opportunity to learn from so many new friends through the serendipity of social media and my life is forever changed for the better because of the #lrnchat community.

On the other hand, I've been participating in #lrnchat for almost 2 years. And its really been the only Twitter chat I've participated in, besides an occasional #edchat or #hcmchat.

In retrospect, this seems absolutely silly. I've talked about in the past how I learn the most from the non-learning focused conferences I attend: gaming conferences, technology conferences, industry conferences...those are the conferences that typically get my mind whirring and my creativity flowing. So why have I not participated in any of the hundreds of chats you can now find on a regular basis on Twitter?

I don't have a good answer.

But luckily, some of my #lrnchat friends pointed out the obvious. We need to learn in places outside of our own backyard. We need to get out into the world and explore. We need to flashmob other chats!

If you don't know what a flashmob is, check out an example of one that I experienced myself by the Opera Company of Philadelphia here. The basic concept is that as people go on about their normal activities, a group of people come in and perform an organized event...and then everyone goes on about their normal activities. Flashmobs aren't intended to be disruptive...they are intended to entertain and enrich and often, to teach something, to expand people's viewpoints.

Tonight was our first chat flashmob. Our target? #4sqchat which takes place Mondays from 9 - 10 pm est. We didn't really know who all would show up...honestly, I didn't plan on participating. But 9 pm rolled around and I was online and I started to see my #lrnchat friends tweeting with the #4sqchat hashtag and I just couldn't stay away.

I will admit, I'm not an avid user of Foursquare and I have been skeptical about leveraging geolocation services for learning. Tonight, as part of the chat, I learned some things and got some ideas that expanded my viewpoint:

Want to learn more about Foursquare? Participate in the weekly chat, check out the chat transcript, or check out this local Indianapolis Foursquare blog: 4sqindy or this more general AboutFoursquare blog.
Another cool thing we saw at the end of the chat? Analytics! Check out this data from Tweetreach on the chat and notice some of the #lrnchatter names on the board :) 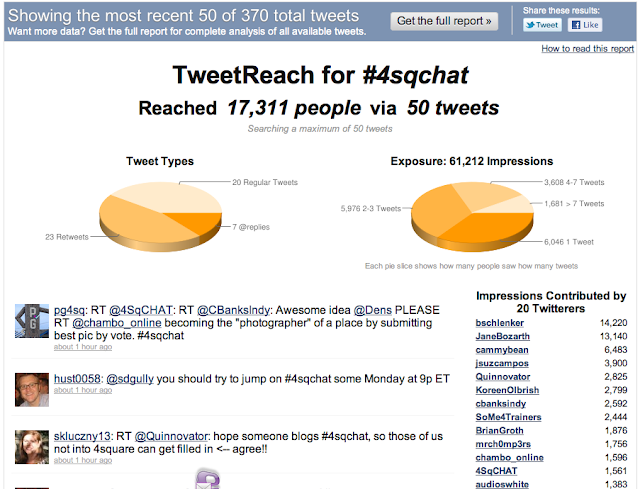 But the coolest part of participating in #4sqchat? We learned new things, met new people and quite a few members of the #lrnchat community who didn't know about our flashmob plans joined in as well! Oh, the beauty of Twitter...
We don't know where we'll show up next, but be on the lookout for the learning mobsters to crash another chat near you...
Posted by Unknown at 12:45 AM 7 comments