It's my end of the year post, and I probably should be writing it tomorrow because this morning I have such a heavy heart. When I think back on this year, I'll remember so many amazing things: a scruffy little dog joining our crew, John finding a job he loves, our wedding, how the kids have grown and blossomed, finishing my book, finding an amazing community at USSB (and jumping in with both feet), and exciting new ventures on the horizon. It has been such a great year.

And still, there are things to do. Today the youngest kiddo got on a plane back to Pennsylvania, throwing the house into a gloomy quiet as we all deal with missing him. We have more work to do to replace the band-aids put in place when we moved to California and it's tough to know what to say to him when he tells us he doesn't want to leave. We don't want you to either, little guy.

This year challenged me to heal and forgive myself for past mistakes. Early in the year, I took a deep breath and told the truth about a past relationship, which was hard and scary and long overdue. After I finally just said the truth out loud, I realized that although we're all the heroes in our own stories, you can easily be cast as the villain in someone else's. Do any of us really see ourselves as a villain? And yet, we make mistakes, we hurt other people, we act out of selfishness and fear. We all do it. As we travel along our paths and make good and bad choices, some of us look at others with compassion and love and forgiveness for the mistakes that we make. Others call names and throw stones and vilify people for their bad choices. I guess it all depends on how you look at the world and how you write the story of your life. I have never thought in terms of good guys and bad guys; real people are so much more complicated than that. And yet every day you meet people who throw a label on you, fitting or not, and there you are, cast in a role you didn't audition for.

This year I've come to terms with being other people's villain. It hasn't been easy. When you're your own toughest critic, it's easy to hear the bad stuff because it justifies that little voice in your head that tells you you're not good enough.  I want to be worthy of all of the good in my life, and it's so easy to believe that I'm not. When I see the amazing people our kids are, when John shows me every day what an amazing partner I have, when I walk out the door in the morning and see ocean and mountains...it's easy to wonder if I'm worthy of all of this beauty. Maybe I'm not. And yet, here it is.

If there was a word of the year for me, it was appreciation. I do not take for granted a single second of the happiness of 2013: so much growth, so much joy, so much love. I'm looking ahead with wonder at the possibilities of 2014 and the work I still want to do. And with that, here's the resolution recap and reveal. It's good to have goals :)

In 2013, I had 3 resolutions: play more games, run another 5k and get to know the local Unitarian Universalists here in Santa Barbara.


I definitely played more games, although they were more of the board game variety. Maybe it was the fact that I can't get much console time with all the kids in the house, but I branched out to mobile and new board games this year. All in all, I'd say mission accomplished, although I'd really like to up my video game play in the next year.

I didn't run another 5k because my doctor told me no. Shortly after running my first 5k, I threw out my back spectacularly, and afterwards was basically cut off from running. Instead, I did p90x before the wedding, which would have been great, but as soon as the wedding was over we were DONE. Not a total bust, but not really what I had in mind in terms of consistent training.

I totally pwn'd the third resolution. Not only did we join USSB in January of this year, but I'm now serving on the Worship Committee and the Membership Committee. I have grown so much from being part of this community. I can hardly remember what it was like to not be part of this church and am so looking forward to the opportunities to participate in the next year.


So, for 2014, I've been giving the resolutions a lot of thought. There are some big ones. Let's see how it goes!


My first resolution is to consistently practice yoga. Back in my pre-kid days, yoga helped  me overcome anxiety attacks, kept my back in shape, and generally made me a happier person. Plus, I like it. So for this year, I'm committing to practicing yoga consistently again, finding a studio or two that I like, and carving out an hour or two a week for some time to find my center.

Second, I'm resolving to find my focus in my "hobby" ventures. I've had a couple great starts in 2013, but 2014 is all about follow-through. There's some great things ahead and I'm ready.

And finally, the big one: I'm giving up meat. This one is going to be a huge challenge, and I don't want to say I'm going to be vegetarian, because I'm still planning on eating fish and eggs. I'm also pretty sure that I'll eat bacon, and if I go to Michigan and my mom makes venison steaks, well...I'm eating them. Despite these exceptions, I've just been reading too much about factory farming, and I've come to realize that I don't believe in the practices that provide us with meat. Having grown up a butcher's daughter, I knew exactly where our meat came from. Today is very different, and while I have no moral opposition to eating meat, I want to know how it got on my plate. I already started on this resolution, and so far, so good.

Thank you 2013 for all the adventures and wonder and love. You're gonna be a tough act to follow.

Tis the season for love, actually

We all have our holiday traditions: how we decorate, what foods we make and eat, special holiday outfits, places we go...and movies we watch. Oh, I LOVE holiday movies.

And my favorite? Love Actually. 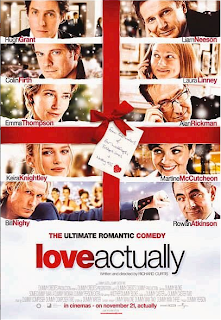 Which is actually taking a bit of a beating by critics as it celebrates it's 10 year anniversary. So let me be defensive for a second.

There is no question that Love Actually, just like every movie, has its flaws, especially as a holiday movie. It's not a "classic." It's barely even about Christmas at all, really. And while some have cried misogyny over the fact that three of the relationships focus on men and the women who work for them...that may be misogyny but it's not unrealistic. And yes, the women mention their weight and there's a lot of emphasis on physical appearance. To be fair, these things might be some of the most realistic things about Love Actually because this move is totally, delightfully, too fantastic to actually happen. And that's why I love it. Because life is ridiculous and unbelievable and fantastical if you let it be, and there will be mistakes and sadness and loss and still, love actually IS all around.

Love Actually captures over and over those fantastical moments and the power of the Grand Romantic Gesture as the point of epiphany for the reality and surprise of love. Sometimes you realize that supporting your family is more important than pursuing a romantic relationship, sometimes you realize that the love of your life is your best friend. Sometimes it takes a big mistake to realize where your heart really is, and sometimes you need to learn a foreign language in a week and fly to France and ask someone who you've known a very short time to marry you. These are the beginnings, the epiphanies, the points of revelation and change. Do we see what happens after? No...just like every other fairy tale, we're left to imagine that people live happily ever after, even though we know it's usually not that simple or easy. But sometimes it is, isn't it?

Maybe your view of love is that relationships are hard work, or that the only true love is one that lasts forever, or that there's no such thing as love at first sight. I disagree. Some relationships are easier than others...it all depends on how, and with whom, you want to spend your energy. Some love is driven by attraction, some by friendship, some by shared life experiences.  Not all love looks the same and that's ok. But let me let you in on a secret: love isn't hard work. Anyone who tries to tell you that it is hasn't found the good stuff yet.

Life, however, IS hard work, and the best you can do is find someone to be by your side to weather the storms. If your relationship is hard work, then maybe you haven't found the right person to share the ride, or maybe that's part of the life work you're willing to do...either way, that's YOUR story. For the rest of us, don't try to convince us to try to stop believing in the fairy tale. We're going to bask in Love Actually: the hope and wonder and sadness and surprise of love in all of its small and grand romantic gestures and the value and beauty in our successes and stumbles in the search for true love. I'll always be on the side of that kind of love, actually ;)

And now to watch The Grinch Who Stole Christmas again, who reached HIS epiphany upon hearing the Grand Romantic Gesture of the Whos singing (without any packages, boxes, or bags). Sometimes it really IS that simple and easy.

ps. Full disclosure: When John and I got married this summer, he surprised me with a tribute to the wedding scene in Love Actually where musicians sing/play All You Need Is Love as the bride and groom's recessional. How's that for a Grand Romantic Gesture?


pps. Find out what character you are in Love Actually! C'mon, you know you want to...