Just finished up my post on the Innovations in E-Learning Symposium, but I had a few observations outside of the play-by-play. 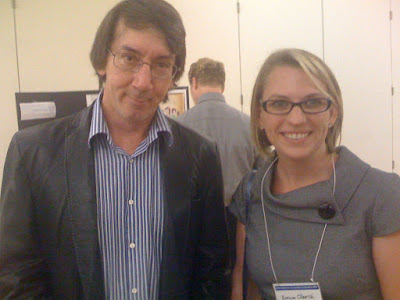 I introduced myself to Will Wright. I got to hear Vint Cerf speak. I told Robert Scoble he didn't do a very good job targeting his audience in his workshop. I hung out in a bar with Brenda Brathwaite. Even one of those experiences would have been blog worthy...and I did all of them in one day. I am not easily impressed. I think people should be embarrassed to go "star spotting." At the end of the day, we're all just people...yes, some people have cooler jobs, or have more motivation, or think differently, or sleep less...but it takes a lot for me to be overwhelmed with excitement or nervousness about meeting someone. After all, don't we all have the opportunity to do great things? Its just a matter of hard work, persistence, focus, resilience...but anyone can choose to think differently, to take risks, to try to change the world.

What that day did to me at the conference was strengthen my resolve. The people I look up to are the people who DO things. People who accomplish crazy goals. People who choose to forge their own paths and not be complacent with the status quo. None of these people were satisfied with working within the system...they chose to create their own systems and challenged the way we think about games, communication, technology, learning.

My conference recap: Innovations in E-Learning

I paid $300 to go to the Innovations in E-Learning conference, run by George Mason University and DAU, in Washington, DC. I got a hotel room at the conference hotel through Priceline for $60 a night. But without question, the experience I had at the conference both in sessions and with the other attendees was priceless. I didn't attend any of the workshops on Wednesday, but came in Wednesday evening to meet in person two of my favorite people in my Twitter network. Dinner (sushi & Sapporo) was excellent but the conversation and face-to-face time was even better, worth the entire trip.

Thursday was my first official day at the conference and it was kicked off with a keynote by Vint Cerf, who was one of the two guys who really did invent the Internet. He started out a bit slow (I'm pretty sure he insulted Twitterers as "twits" early in the presentation) but as he progressed through his presentation, things got more and more interesting and frankly, more and more surreal. Google Mars was very cool, but the Interplanetary communication plan, IPN (InterPlaNet), that's he's working on in his spare time made me feel like whatever I accomplish in my life, its never going to be as cool as Vint Cerf. And it was only 10 am. 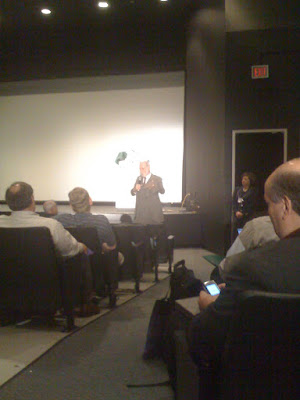 Next up was Mark Oehlert's (@moehlert) pinch hit for Intellagirl (@intellagirl) Sarah Robbins, who couldn't make it to present. I did my best not to pipe up too much, but the topic was on virtual worlds and sometimes I have some opinions on that topic. Good thing Mark is smart, both in what he said about virtual worlds, but also in not making eye contact with me to give me an opening to talk.

One of the things I find fascinating about conferences is how much interesting conversation happens outside of the conference. I took the next session "off" and instead hung out with a group of smart friends to talk about various aspects of the morning's keynote, mobile learning, and other various geeky topics before heading over to lunch.

The keynote after lunch was...Will Wright. Um, yeah. He's developed such little games as SimCity, The Sims, and Spore. As a simulation and game developer, I'm not sure if there's too many people that rival Will Wright in sheer idolness for me. And his keynote? I don't know when I have spent an hour thinking more about simulation, game design, and learning. He made my head spin, not only from the pace but also from the sheer brilliance of the information he was sharing. I hear that his keynote will be up online soon. When it is, I'll provide a link. 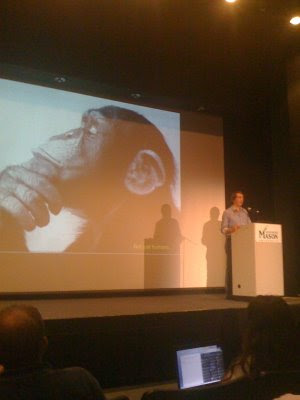 I then had the pleasure of sitting in on Aaron Silvers (@mrch0mp3ers) session that focused on a case study of how Yammer was subversively integrating into his current organization. Some great observations and lessons learned about how social media adoption CAN be viral, but that sometimes viral demands an executive push.

Final workshop of the day was supposed to be on blogging for educators and learning, presented by Robert Scoble (@scobleizer). Honestly, I'm not sure how we all fit in the room with all of the names that were dropped, but we did get a sneak preview into how Scoble works at filtering his information and news streams to determine what is worthy of him to post about. That said, I was annoyed with his lack of focus on learning, oh, and his COMPLETE lack of focus on blogging. It does appear that Twitter and FriendFeed have taken over the relevance of blogging, at least to some extent. Who knew blogging was so old-fashioned ;) 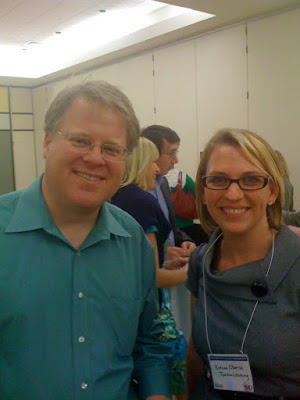 After the workshops, there was a reception to announce the winners of the GameJam contest, awarded by Dr. Alicia Sanchez, Will Wright, and Dr. Brenda Brathwaite (who had presented a workshop on Wednesday). So there I was, having made fun of a certain friend for idol-geeking out all day...and I had to not only introduce myself to Will Wright and Robert Scoble, but also ask for pictures with each of them. Me=shameless.

Dinner and drinks congregated old friends and new ones to talk more about the mind-blowing awesomeness of the day. Its absolutely fascinating when you think you can't possibly take any more information in...you hear the perspectives of shared experiences and suddenly the learning continues.

Day Two started with Gen. Frank Anderson presenting about how the DAU is implementing innovations in learning. They train A LOT of people. Not that I didn't already know it, but it made it all the more impressive that an organization as large as DAU had people with titles like Innovation Evangelist and that they are actively looking at how to incorporate virtual worlds into their curriculum delivery mix. It was also pretty cool to see the Tandem Learning logo up on one of General Anderson's slides, even more so because it was unexpected. 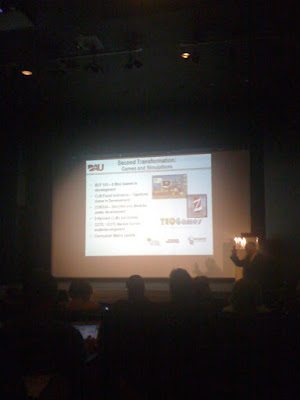 The next session, I just couldn't decide what to do. There was an impromptu meeting in the coffee shop; a few people were gathering to talk about overcoming institutional obstacles to implementing new technologies. What it ended up being was a rich discussion of how innovators and internal evangelists across verticals (government, enterprise, academia, K12, and yep, even vendors) all share similar obstacles. The result was the formation of the Black Swan Society--a group focused on helping each other address the issues facing innovation and organizational adoption of (and adaption to) technologies and processes that more accurately affect how we work, communicate, and learn. I encourage you to come contribute to the conversation.

I had to get on the road after the first unofficial meeting of the Black Swan Society...but my head was full. Perhaps this conference, more than any other I've attended, represented for me the best of what conferences can be. Brilliant and inspirational keynotes, engaging workshops, challenges to my pre-existing assumptions, strengthening my network, meeting amazing people who are facing my same challenges AND with different perspectives, and a plan for continuing the conversation after the conference.

And I got to meet Will Wright...

Why Spymaster isn't a colossal waste of time

A couple days ago, I started seeing people I follow on Twitter getting assassinated. My first inclination was to find out what I needed to do to start assassinating people myself. And so I signed up for Spymaster.

Let me start by saying that I've never joined into any of the social games, like Mafia Wars, on Facebook. But honestly, I have given up on Facebook for the most part, and Spymaster is run through Twitter where I spend an inordinate amount of time (thus the two weeks since I've blogged anything...). Immediately I saw complaints in my twitterstream on the Spymaster spam (yep, its annoying) and naysayers touting it as a waste of time. Still, there were a few people I wanted to assassinate and so I signed up anyway. 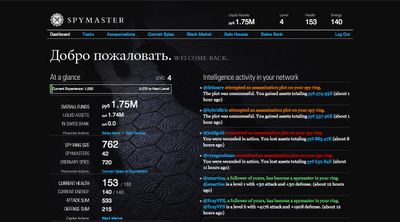 Spymaster is not a learning game. But it is a game run in conjunction with a social media outlet, and a lot of my Twitter friends (who I think are really smart people) were definitely engaged. So for the last two days, I've played Spymaster. Here are my observations and conclusions:

- Yes, incentivized spam is annoying: Spymaster rewards players for posting a variety of updates on Twitter. The more you play, the more annoying this is for your followers who don't care if you just wounded @spydeesense or if you just bought a new safe house in Rio. But the temptation is there to post these things, since the game "pays" you for each update posted. This is probably the worst design feature, and although the updates can be turned off, the incentives make you think about it before finally deciding that a few "rubles" or "pounds" aren't worth the followers you're going to irritate.

- Its fun to assassinate your friends (and people you don't know, too): People are competitive. Social games feed the need for competition in a communal way, and a social media tool like Twitter is an interesting format for combining social technology with gaming. Its been done with Facebook, it'll be done with other social media tools too. Wherever people gather socially, people will be inclined to play games.

- But can it be used for learning?: The question I always come back to is how can the engagement that is garnered through games be translated into learning experiences? Most games actually do teach something, its just not explicit. A lot of games for learning somewhere along the way lose the thing that makes people want to play them: they lose the fun.

Spymaster, on the surface, is a simple game of accumulation and leveling up: assassinate people and perform tasks to make money and gain experience, allowing you to level up and more easily assassinate people and perform more complicated tasks. There incentive to get your Twitter friends to join the game to make your assassinations stronger. There's an economy of purchasing weapons, buying safe houses, and "saving" money in a Swiss bank account.

But the real "game" is the strategy in determining HOW you're going to level up. Do you focus on assassinations, or performing tasks? How much risk do you take on? How important is it to get your friends to become spymasters in your network? Is it better to try to assassinate your friends, or strangers? How do you pace yourself so you don't lose all your energy? Ok, granted, the content of Spymaster isn't particularly useful for anything I do in my day to day life (although based on my performance in the game, I would make an excellent Russian spy). But what if the content were a bit more "serious"? Could this same format be used to teach job performance content? Could it be used as an assessment technique? I think there are any number of potential uses of social games for learning...and sadly, very few have yet been seen or taken seriously.

I've lately been focused on ARGs as the next wave of games for learning. But social media games may be another viable model for learning, and a market full of immersive, engaging learning possibilities. Now back to my safe house to plot the next assassination...
Posted by Unknown at 8:52 AM 4 comments