Alright, this is a reaction post to a post by Clark Aldrich that was his analysis of the difference between a game and a simulation. If nothing else, at least it got me motivated to blog instead of just tweet (are you following me on Twitter? @koreenolbrish).

Clark uses a swimming analogy to demonstrate the differences, and somehow virtual worlds made it in the mix as well. And that's when the trouble started.

Here's a very simple definition of the difference between a simulation, a game, and a virtual world. A virtual world is a framework, an environment if you will. Its a place waiting for context and possibly content. A game is competitive or scored and the goal is to win (although for serious games, we're hoping something is learned in that quest for victory). A simulation is a storyline that typically requires decision-making to determine the outcome, but win or lose, its the journey that's important.

The funny thing is, I think Aldrich's earlier post that describes simulations, games, and virtual worlds as nested concepts, and where he introduces the acronym (ugh, ANOTHER term...) HIVE (highly interactive virtual environments) is actually MUCH closer to how these concepts intersect. And while as a learning professional I applaud the attempted use of an analogy to describe the differences between games, simulations, and virtual worlds, I think he further confused the concepts instead of simplifying them. I'm not going to attempt an analogy, but here's my simplification for anyone who asks what's the difference between a simulation, a game, and a virtual world: 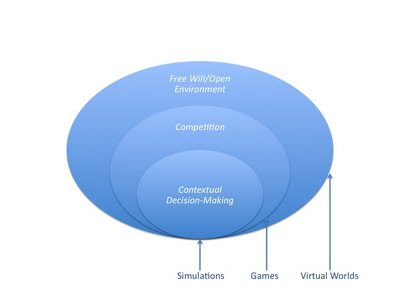 Now I'd like us all to move on and start thinking about how we can design good immersive learning instead of worrying about what to call it, thank you very much ;)

Haven't posted here about the 3D TLC and Federal Consortium of Virtual Worlds conferences in Washington DC last week, but I did a post for Virtual World News that you can read here. Thanks to Joey Seiler for the invite to write the post!