In light of Apple's announcement on their iBooks Author program and the release of iBooks 2, there's been a flurry of discussion of how this is the nail in the textbook industry's coffin. Maybe...but likely not.

The truth is, we NEED curators, and that's what the textbook industry is. For all of their (many) faults, textbooks try to collect and document information to provide a basis for what constitutes being educated. (I'm resisting adding quotes around the key words in that sentence...) As long as we are depending on others to do the curation for us, we are subject to their biases. When I wrote my Master's thesis on media literacy, I had no idea that it would become exponentially more important to develop those critical thinking and analysis skills; at the time, I was focused on subliminal gender and political biases perpetrated through marketing and journalism. I focused my media literacy curriculum on questioning the source and asking questions like:


I could go on and on.
The point is, EVERY communication is biased, but where journalism, media agencies, and even educational curriculum developers (eg, textbook publishers) are concerned, we are not usually taught to consider the source.
We should always consider the source. We all need to become curators.
Even more challenging is our brain's awesome and frightening ability to create fabricated memories based on our biases. We need documentation and curation to prevent not just the biases of others, but our own personal biases, from rewriting history.
Not all opinions are created equal and not all "facts" or "truth" are created equal either. The goal of "fair and balanced" shouldn't just apply to political journalism, it should apply to any content we consume. Collect data, consider the source, examine the biases...don't confuse opinion with fact.
As the opportunity for curation and publication becomes more readily available, the need for media literacy, critical analysis of content, and curation skills become increasingly important. I'm thrilled that tools are becoming available that are challenging the stranglehold of textbook publishers. But the bigger question is, are we prepared for the responsibility inherent in the use of those tools?
Posted by Unknown at 1:29 PM 0 comments

My guest post on the Ayogo blog: community management, bullies and taking action

A few times a month, I'll be writing games and learning-related ruminations for the Ayogo blog. Kicking off this year, today's post on learning community management, and specifically on how to handle online bullying, encapsulates some of my thinking around how a few bad apples can ruin the online community bunch and how that can impact opportunities for learning.

Then, if you're in the US, call your Congressional Representatives and Senators and find out their position on SOPA and PIPA. Send them emails and tweet to their accounts. Blackouts may work if you're a large organization with lots of publicity, but for the rest of us, its our voices that will raise awareness and get results. Don't be silent; take responsibility for our Internet community.

If you need the contact info for your Representatives and Senators, find them here:
http://whoismyrepresentative.com/

Ignorance is bliss, knowledge is power & the fear of hypocrisy

First post of the new year, and I'm not starting out lightly...

Earlier this week, my friend Brian McGowan posted this tweet:

I spend a lot of time thinking about behavioral change, organizational change and performance improvement as an immersive learning designer, and lately even more than usual as I finish my book. We even designed a game on personal resilience in The Change Game. Suffice it to say, expertise in change and resistance is required for what I do every day.

I just never considered fear of hypocrisy as a motivation for intentional ignorance.

Some people might call it self deception, or denial...but those things are different. Those labels refer to people who actually know something but convince themselves that what they know isn't true. There are a number of reasons why someone would deny something they know to be true and not being a psychologist, I'm not going to examine those motivations. While self deception might be interesting to explore as an obstacle to change, I'm more interested as to why someone would intentionally choose not to collect the information they should have to make an informed decision.

Brian's tweet, and the subsequent exchange with Julie Dirksen, got me thinking about what that decision-making process might look like. As a rough pass, I've flowcharted it here: 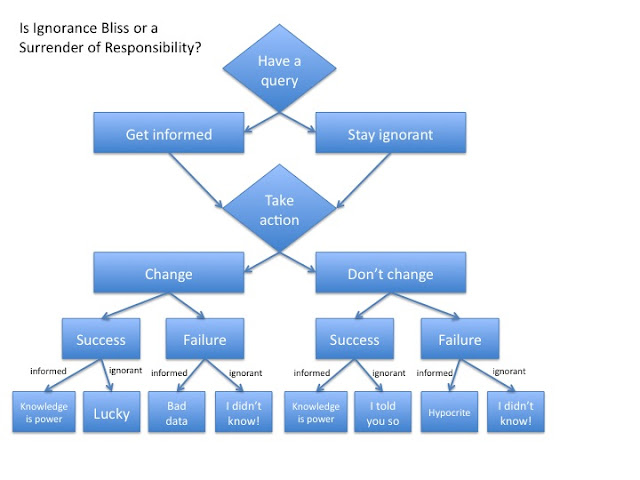 I'll walk you through my logic...

After you decide to research the answer to your question, or not, you have a choice: change what I'm doing, or stay the course. Either way, there's a chance that you will succeed and a chance that you will fail. For the sake of this discussion, I'm also not going to explore the likelihood of success or failure based on your level of being informed versus ignorant...there is probably data out there that shows a higher likelihood that you will be successful if you're informed, but I'm focusing more on motivation and perception here, not the actual validity of the decision.

So, what if you fail? Here's where I think things get interesting. If you change and fail, and if you were informed, you might blame bad data on the decision to change. You might also blame things like lack of experience, lack of knowledge on how to operate in the new environment, or not anticipating the full impact of the change...in other words, you'll likely think that you weren't informed enough. The same rationale holds true for the decision to not change that results in failure, but with a twist...if I was informed and decided not to change, was it because the data told me not to change or was it because I ignored the data that informed me I should change? And if I knew that I should change, and I didn't, does that make me a hypocrite?

Organizationally, and in regards to learning innovation specifically, I hear a lot of objections to exploring new design strategies that sound like "our people aren't technology savvy" or "we don't have the money for those types of initiatives" or "our company isn't ready for that." But are you sure? I'm guessing your people are much more technology savvy than you think, that "these types of initiatives" are a lot less expensive than you imagine, and that while your company may not be ready for change, companies that don't change don't succeed.

On a personal note, it takes a certain type of emotional fortitude to deal with the data that research may turn up, and some people, and some organizations, truly don't want to have to face the decision to change. As part of the Twitter conversation with Brian and Julie, Julie shared a link to an article on self-deception, and research was shared out that showed "ignorance is bliss," that people who remain ignorant are happier. I don't disagree with that; shirking the responsibility of knowledge puts you in a childlike position of letting others make the informed decisions for you. There are lots of times I'd love to "not know"...how much work there is to be done to fix broken systems, how much injustice exists in the world, how many problems there are to tackle, big and small. I'm sure life would be easier and I'd get more sleep.

But then I read a comment on the Noam Chomsky interview on self-deception and I believe the same  applies to intentional ignorance. Choosing to be uninformed is bigger than just displacing responsibility of action; deciding to be ignorant defines who you are, either as an individual, as an organization, or as a society. The brackets are my addition, with apologies to Richard for applying his thoughts to a different, but related, topic:

RichardSabi
It is interesting that people respond with indignation to the idea of liars {the ignorant} being happier. Some commentators said it was obviously not the case.
Ah, for me the question is rather, what is the pay off for living without self deception {ignorance}?
Could it be self-respect, the ability to appreciate beauty even in a flawed world, resiliency and fortitude, and dare I say it, spiritual maturity?
May. 07 2011 04:52 PM

I do believe that knowledge is power and with great power comes great responsibility (attribution to Voltaire and Stan Lee). While it may not make us happier to be informed, I believe it makes us better. Fear of hypocrisy is a poor excuse for remaining ignorant; better to resolve yourself to informed action than remain in the dark. An informed society is a higher functioning society, an informed organization is a higher performing organization, and an informed person is a more responsible decision-maker.

In 2012, may you be better informed and ready for the changes ahead, because there are always changes ahead...