My 7 year old is a gamer. He prefers what he calls "learning" games (he's not much for the "fighting" games...doesn't see the point). But recently, he's transitioned from simply playing games into making his own games and animations. He started out with Scratch and now has moved onto Alice. I can't say enough about either of these programs; if you have kids who are interested in games, they are great tools to get them started.

In helping him think about what he's designing, we've been referencing other games that he's liked playing. Two of his favorites are Big Brain Academy on the Wii and The Impossible Quiz, which he plays on his iTouch but also on the laptop. Both of these games have been highly engaging, and both of them are quiz/puzzle-based. But their design is pointedly different, and provide some insight for learning game designers.

Big Brain Academy focuses on a series of questions that fall into different categories, such as visualize or compute. The questions vary, and your performance is measured in the time it takes to complete and how many you get right. For example, in the compute category, you might be asked to pop balloons that have numbers in them, from low to high. The first few are pretty easy, but then negative numbers are introduced and players need to understand the concept of the number line in order to be successful. The game play focuses on repetition to keep increasing the number you get right, and how quickly you get them right...essentially, repetition for mastery of the concept.

The Impossible Quiz is equally, if not more addictive. The first quiz is 110 questions long, but questions are puzzles themselves and if you burn through your 3 lives, you start over from the beginning. You get the exact same questions every time. Game play is progressive...by the time you get to question 84, you can fly through the first 83 questions because you've learned the tricks and solved the puzzles. The challenge is solving the next puzzle, not repetition of the previous puzzles for mastery. The content is the challenge, and once the content is mastered, its time to move onto the next question.

So which design is better for learning? Both of these games are highly engaging and the sense of accomplishment elicited is intrinsic in the game design. But at the end of the day, my son is a master of the number line in any context, but I'm not sure he's any better as solving puzzles...he just knows the answers to The Impossible Quiz. If the learning goal is to communicate content, The Impossible Quiz design gets the job done nicely. If you want to teach a concept, focus on the design elements seen in Big Brain Academy.

For now, the 7 year old is more interested in emulating content puzzles...be on the lookout for "The Impossible Space Quiz." In the meantime, check out his portfolio on Scratch...and feel free to leave a comment if you see something you like! 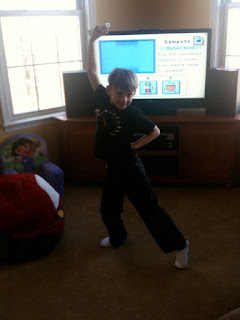 (This blog post approved by Jackson Olbrish.)
Posted by Unknown at 10:39 AM 1 comments

Instructional versus experiential design: do you have what it takes?

Instructional design typically focuses on the systematic layout of content in a way that can be easily understood, and hopefully learned, by the intended audience. Classroom curriculum development, print, e-learning...typically they present the content, explain the concepts, and allow for some kind of practice before providing some way of assessing what you learned. Most instructional design degree programs focus on this pattern, and applying it to different content. Many instructional designers become experts at breaking content down into easy-to-understand, bite-sized pieces--making difficult concepts easy to understand.

This actually makes a lot of sense, right? If something is difficult to understand, its important to simplify it so that it is understandable. This type of instruction is important, and has its place. But its not the same as experiential design.

The truth is, life is complicated. Decisions are complicated. Many times, there isn't a right or wrong answer--there are better and worse answers. There are often hidden implications in addition to the obvious ones for any decision we make. There's a reason why its called complex decision-making. Its not easy. And you really can't simplify it so that its easier to understand. We can really only get better at dealing with the complexities of the real choices we are faced with every day by practicing making those tough decisions.

Enter experiential design. Where immersive and experiential learning succeeds is in replicating realistic environments and presenting complex problems that require deeper reflection and understanding than most content or concepts presented in traditional training. To design experientially, you have to design a mirror to reality. You wouldn't want a doctor to perform surgery on you who hadn't practiced numerous times and faced a multitude of different situations before. Nor would you want to fly on a plane with a pilot who had only flown a couple times before getting in the cockpit. Why would you want a company full of employees who weren't skilled in handling the complexities of business decisions that companies face every day? No, those decisions typically aren't life or death. But they could mean the life or death of your organization.

In real life, there are very seldom heroes who always make the right choice or villains that always make the wrong ones. Most of us struggle day to day with facing tough choices, weighing all of the options, and making the best decisions we can. The potential of experiential learning design is to be able to provide practice making those decisions and seeing the potential short-term and long-term implications and outcomes before we make the decisions in real life. Call it insight. Call it reflection. Experiential design allows us to help people overcome short-sighted or narrowly-focused decisions by providing the long-term and wide-reaching implications.

I'm looking forward to talking about this topic more at Learning Solutions, March 24-26th in Orlando, in my session with Ellen Wagner and Cammy Bean titled New Skills for Instructional Designers. And I'm thrilled to be participating in Harrisburg University's LEEF conference June 17-18th where I'll be spending 2 days hearing amazing case study examples of experiential design in simulations, games, and virtual worlds for enterprise (& I hear I'll be presenting on alternate reality games as well...).

Its time that instructional designers more specifically define their skill sets and identify their expertise. Are you designing for simplicity or complexity? In either case, do you know what it takes?

The name of the game in virtual worlds? Monetization.

I'm at GDC (Game Developer's Conference) in San Francisco this week. Learning a lot, seeing some great, and some sketchy, sessions...I've only got the Summits & Tutorials pass, so I won't be able to comment on the regular conference sessions. They did away with the Virtual Worlds summit track this year, but they keep creeping into the other sessions. Lots on social gaming and mobile, and a bit hit or miss (but I think better) line up in the Serious Games summit track.

One initial observation? Much less discussion on design, unless of course you want to learn about design for monetization. Holy cats, I know people ultimately are in this to make some money, but the emphasis on the manipulation of players to convert them into paying customers, and if you're really lucky, subscribers, has been downright depressing. The session on what social gaming can learn from virtual worlds featured "Hangout" which is evidently a new teen world, and initially, primarily targeted to girls. It reinforced every superficial stereotype of young women that the media perpetuates, and it was described with such a casualness that everyone may have missed that it was a soulless vehicle to pander to the media bias that the most important things to teenage girls are clothes and boys. SIGH.

The best session I attended so far was by Eric Ries, who talked about the ecstasy and agony of being a start up, and provided two really interesting case studies on virtual worlds start up companies There.com and IMVU. For those who don't follow these things, There.com just shut down yesterday and IMVU is one of the most successful (if you look at profitability and active users) virtual worlds. Main lesson learned? There.com followed the "rules" and it killed them...IMVU did the opposite and it's flying above the carcasses of other dying worlds.

On a positive note, met some great guys working on some virtual world stuff for enterprise that, if what they say is true, is going to turn some existing platforms on their ears. There are cool things on the horizon...stay tuned for when I can actually talk about it (after I see it and sign an agreement to what I can actually say...) but its about time that we had a browser-based platform for corporate uses that leverages other open API technologies, no?

Its a different vibe this year. It seems a lot smaller. It actually seems a lot quieter, and a bit more desperate. I learn the most at GDC of any conference I attend because seeing what is happening in the entertainment space helps shape how we are designing for corporate learning. We're bolstering our knowledge of ARGs (alternate reality games) and mobile learning through the sessions and technology featured here. But the unrelenting circle-back to "this is how you can make money" is starting to bother me. Good design in entertainment should lead to more customers...good design in training materials should lead to more informed, more educated, more highly skilled learners. Yes, tell me how you're designing for engagement...but not to get someone to push the "Pay" button.