The end of a decade and a year to remember

I was trying to reflect on the year 2009, and was having a hard time with inspiration. I feel strongly about reflection and goal setting, but to be honest, I'm overwhelmed with the enormity of the events of this year for me.

Then I started to think bigger. I noticed a bunch of people on Twitter were reflecting on what they were doing 10 years ago, and it actually made me think about how my life has changed since the clock struck midnight on January 1, 2000.

I've bought two houses.
I've welcomed my 3 kids into my life.
My parents moved in with me.
I lost my grandmother.
I started a company.

I was really, really busy.

So 2009. Our sophomore year at Tandem Learning. It seems like personally and professionally, a lot went right and a lot went wrong this year. I think what I will remember most about 2009 is how I changed. I couldn't blog about my reflections on the year without talking about the amazing people, and some dear friends, that I met through Twitter--people who I'm now happy to say are also my "in the flesh" friends. I learned how to rely on and depend on people this year in a way that I never have before. I'm learning (sooo still in process) to be better at asking for what I need. I got better (again, a work in progress) at separating out my personal time from work.

Most important, I think 2009 was the year where I started to see who I really am. I say started, because I'm in no way thinking I have things all figured out. I confirmed some things I already knew, but discovered a lot of things I didn't even have a clue about. Momentum keeps you from slowing down and reflecting sometimes. Momentum has driven me through this decade but 2009 was a whole year of self-reflection. It wasn't an easy year, but it was an important year. I will remember this year for everything that I learned about myself and the foundation that it laid for the next year, the next decade...the next adventure.

I'm going to admit something here, on my blog, that maybe only 1 or 2 people in my life actually know. I am addicted to immersive environments and games. Not tic-tac-toe or football, but role-playing games, the kind that immerse you in the storyline and engage you with your character in completing an objective, scoring points, and ultimately, winning.

It probably started when I was a little girl, when I was obsessed with fantasy stories like Lord of the Rings and The Lion, The Witch, and The Wardrobe. I read all of those books, read all of the Wizard of Oz series...anything that I could find that could transport me to another world. My mom used to take my books away from me in the summer and make me go out to play. In college, I was introduced to Dungeons and Dragons; I would spend whole weekends playing around the clock. I was finishing grad school when I worked at a camp for a summer and spent my days on the porch of the computer lab playing Magic the Gathering. And then, two years ago, I discovered Second Life. 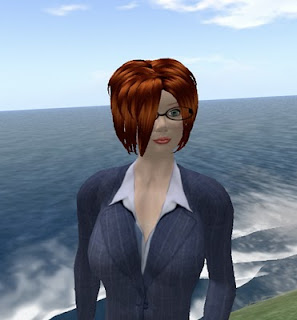 No, its not a game. But I spent months and months in world, and now, in retrospect, I can see how it affected me and the people I love. I was working, yes, because I work in virtual worlds, but it went beyond that. I was truly immersed and it was impacting the rest of my life. After about 4 months, I started to ween myself out of my Second Life and re-engage with my real life. Its been a long process, and truly, the lure of games and immersive environments is still a constant pull (just this week I have been obsessed with Epic Pet Wars on my iPhone). But I've been managing to put down the laptop more and more.

And then last night. I got a 2 month subscription to World of Warcraft for Christmas. I was SO excited. I've been wanting to play WoW for a long time, and this was finally it! But...after spending two hours debating what race and class I would choose, I realized...I can't do this. I can't casually play RPGs and engage in immersive environments--they are an addictive lure to me. It also made more clear the reality behind the argument that a lot of people have against the use of virtual worlds: I don't have time. If I were to start playing WoW, I would want to really play. And that would require hours. Hours that I wouldn't be spending with my kids, hours that I wouldn't be working on my still relatively new business. I can't afford the time.

This is not to say that I don't want to play, or that I think there is anything wrong with people who choose to immerse themselves in MMOGs or virtual worlds. But I know what the trade offs are for me and so, I choose to battle my business competitors instead of Blood Elves and dance with my kids instead of Gnomes. But my pet sheep, BaadMaamaJaama, is level 16 in Epic Pet Wars. Just sayin' ;)
Posted by Unknown at 3:35 PM 0 comments

I'm usually a big fan of bold predictions and grand visions of the future, maybe no more so than as they pertain to virtual worlds. I've thought, since the moment I first saw an avatar wandering through Second Life, that virtual worlds hold a promise for communication, collaboration, and learning that is uniquely different than any other technology.

But progress has been slow. The technology isn't quite elegant enough for widespread adoption and those of us who see the future have a difficult path to travel to convince the many naysayers armed with logical and reasonable objections to virtual worlds for serious applications. Its a small and quirky band of visionaries at this stage of virtual world adoption, and we all have our unique perspectives and area of focus. Obviously, my perspective has been from the side of content design, specifically for learning. But its given me a unique view, and ability to look across all of the virtual world technologies in the market and figure out what's working and what's not from a user experience and learning design perspective.

Yesterday, I read this blog post from Justin Gibbs, tweeted by @dshiao (thanks!), about the transition from virtual worlds 1.0 to 2.0. I agreed with Justin's take on the issues with the state of 1.0, but didn't really agree with his thoughts on vw2.0.


I'm sure I'm missing the one thing that will actually change the industry (like when Microsoft integrates a virtual world technology into their Office suite). But I believe these things will happen and that will be the transition from where we are now to where we see this technology taking us. I'm really looking forward to virtual worlds 2.0.
Posted by Unknown at 12:48 AM 15 comments

What makes a great instructional designer?

Yes, I'm officially late to the party, but there's been a great discussion going on courtesy of an initial blog post by Cammy Bean, and great follow up discussion and posts by smart folks including Sahana Chattopadhyay, Brent Schlenker, and Karl Kapp.

To sum up in my own words, there's not one flavor of "instructional designer" and most of us who call ourselves by that title have ended up here through a mix of accident and intention. Some of us come from business backgrounds, technology backgrounds, some of us from education and teaching. Some IDs were subject matter experts who were tapped to train others in their organizations. Very few, if any of us, went off to college saying "I want to be an instructional designer!" And likely as a result of the long and winding road to becoming IDs, we all have interesting and varied backgrounds that inform how we practice instructional design.

Sure there are some commonalities...we all know what ADDIE is and we're all familiar with Bloom's taxonomy. But our process, our day to day responsibilities, and certainly our perspectives, are very, very different.

I've been so bold as to claim "instructional design is dead" and I've tried to explain my perspective on why. But as much as there is variation and possibly role confusion to our collective detriment in our profession, there are brilliant people who I meet every day who exemplify the best of instructional design. Here's a few of the characteristics I look for whenever I go a-lookin' for a great instructional designer...


So, do I think you need a degree in Instructional Design to be a good ID? No. Do I think some formal training helps? Yes. I like Cammy's suggestion that ID programs might be better delivered with a business degree. But ultimately, its not the degree that makes the ID...its the vision, the leadership, the creativity, the flexibility, and the ability to apply all of their "formal" knowledge about learning in varied and ever-changing business contexts.
Posted by Unknown at 8:40 PM 3 comments

Last week I attended I/ITSEC, which (if you haven't been) is an awesome display of immersive learning environments for government and military. The conference is a veritable who's who of technology and service companies who work in the training and simulation market for government and the sheer scale of the expo floor makes most other conferences I attend throughout the year seem like intimate meetings.

This year, I was completely underwhelmed and frankly, kinda disappointed.

I should frame my feedback by admitting that I only had an expo pass, so I wasn't able to attend any of the sessions. That said, most of the real action at the conference happens on the expo floor (at least the action that isn't private meetings...). Maybe some of my disappointment is because the expo itself was only 3/5 of what it was last year. Surely, its because half of the booths I visited were showing the same technologies and demos that they showed last year.

There were some exceptions. I was geeked out by the DaVinci virtual surgery equipment. There were some interesting games in the Serious Games Pavillion. I had a great talk with a kindred spirit from Lockheed Martin, I saw an amazing example of virtual worlds for learning (more on this coming soon!), and our dopplegangers at Hybrid Learning continue to awe me with their mobile learning examples.

But by and large, there was nothing earth shattering. Not too much that warranted a second look. Anything really cool, you had to really look to find it. So in an industry with so much money, and so much obvious interest in simulations, games, and virtual worlds...why was I so disappointed?


I will say, in my second year at the "big show," that I finally got all of the acronyms down. But getting past all of the industry lingo and fanfare, what I saw this year was a lot of money being spent on concepts, but not necessarily effective solutions. I saw a lot of intention resulting in poor execution but masked by glitzy technology.