On Being a White Cis Woman at the #WomensMarch & Beyond

I keep thinking back to Jack's quote from Lost as I write this: But if we can't live together, we're going to die alone.

Maybe dying alone is a dramatic outcome, since we're not stranded on an island and based on the attendance of about 3 million people at marches all around the world last Saturday, we are most certainly not alone. But it is true that we are stronger together, and in order to truly "be together," not in the physical sense of marching, but in the ideological sense that we're all standing up for one another, white women have a lot of work to do.

If these things don't make you pause, then you're not doing the hard work yet.

And consider this photo:

When I saw this photo online, I made the mistake of reading the comments. Predictably, white women were defensive. I don't know the women in the photo, and for all I know, those white women are active transgender organizers in the Black Lives Matter movement. I have no idea...and the point isn't about those women personally. The point is that while we are donning pink knit hats and posting selfies of ourselves at the march on social media, women of color know that MOST white women voted for a candidate who has bragged about sexual assault, does not acknowledge #BLM, is already threatening women's health by defunding Planned Parenthood, and is threatening the rights of our LGBTQ community.

White women, we're embarrassing ourselves and undermining our claims of feminism if we ignore that more of us than not support the patriarchy that continues to hold all of us back.

This weekend I also saw an online post from a white woman explaining why she wasn't attending the Women's March (not linking to it here. I don't want to be responsible for promoting it). It was a whole lot of march shaming, culminating in the assertion that we should stop whining about how bad it is in the U.S. and go help women in other countries who have it much worse than us. Not surprisingly, a bunch of white women posted and liked it on Facebook. And I thought, THIS is who we need to understand. White women who voted for Trump, who are shaming those of us who are fighting for equality, who are denying our lived experiences. Just as bad as the white liberal feminists who want credit for showing up but not doing the hard work are the white women who deny that the hard work even needs to be done.

So for my white cis sisters who attended the march, waving their signs and wearing their pussy hats, here's some work for us to get started on this week. It's not going to be comfortable. As our sisters of color and trans sisters can tell you, it is not easy. But if we are to live together, to work together, to make change together, then we need to be prepared for the fight. This work is going to require more than poster-making or hat-knitting skills. It requires us to examine our innermost biases and beliefs, open ourselves to the experiences of others that are different than our own lived experiences, and then fight to change their experiences even when fighting for them means challenging our own privilege. THAT is the work.

And for any of the white women who voted for Trump, or who spoke out against those of us who attended the Women's March this weekend, I invite you to do the work, too. We really are all in this together, and it all starts by listening to each other. ALL of each other, not just those who look and think and vote like you.

Ask yourself these questions: 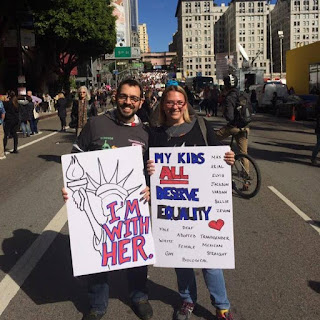