What would Geraldine Ferraro do?

This Sunday I had the privilege of leading services at the Unitarian Society of Santa Barbara; I chose to tackle the topic of gender equality. The following is my reflection on gender discrimination.


I know the exact moment I became a feminist.


It was 1984 and my elementary school was holding mock presidential elections. I knew I was a democrat because, while Walter Mondale was running for president, I barely noticed him in the shadow of my hero, Geraldine Ferraro.


My mom had raised me to believe that I could do ANYTHING I wanted to do, be anything I 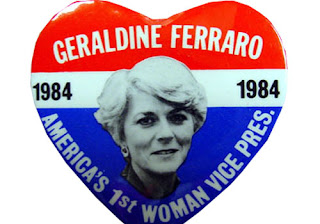 wanted to be. But when I learned about history, specifically US history, and I saw that endless parade of white guys, I wasn’t sure that being president was included in that word “anything.”


I was only 10 years old at the time, but I also remember that about the time that I was learning about political party affiliations, I also learned about sexual orientation when I heard Geraldine Ferraro called a lesbian and asked my mom what that meant. While my mom answered me with definitions not emotion, I understood from the way the media was depicting Geraldine that the only thing worse than being a female Vice Presidential candidate was being a gay female Vice Presidential candidate. I didn’t understand either as being an insult, although that’s how they were being depicted in the media. In spite of all the vitriol flung in her direction, I hoped and prayed that Walter Mondale would win so that Geraldine Ferraro, a woman, would be 1-step away from being President.


It was, of course, not meant to be, and I heard all of the commentary after the election that maybe having a female running mate had been a publicity stunt, or that it cost him the election. I was angry: angry not only because Geraldine Ferraro wasn’t going to be Vice President, but because so many people thought she shouldn’t, or couldn’t, be because she was a woman. I realized that while my mom told me I could be anything I wanted, a lot of people didn’t agree. I was frustrated, I was confused, I was sad. And I was angry.


I know the exact moment I decided to stop taking math classes.


My junior year of high school, I was taking a class called math analysis, which was the name for the honors pre-calculus class. My teacher had been teaching this class and honors calculus for over 40 years. I was getting a B in the class, which was driving me crazy because it was ruining my straight-A grade point average. About half-way through the second semester, I was frustrated when I got another test back with a B grade. I reviewed my answers and couldn’t figure out why I had gotten one of the problems wrong. I compared my test to my friend’s; he had gotten an A. We reviewed my wrong answers and found that they were exactly the same, except his were marked correct and mine were marked wrong. I remember walking up to my teacher with both tests in hand and asking for an explanation for why my answers had been marked wrong.


My teacher answered, “Because you’re a girl.” I wish I could tell you that he was joking, but he wasn’t. He refused to correct my test grade. There were only 2 other girls in my math class. They had gotten lower grades, too, but didn’t want to make a big deal out of it.


You’d think that I would have freaked out, and you’d be right. I went straight to the principal’s office after school and showed him the two tests, then told him what my teacher had said. I told him I wanted the teacher fired, and I wanted my grade changed. The principal said, “Your teacher has Parkinson’s disease, so he’s only teaching for another couple years. There’s nothing we’re going to do.”


For the rest of the year, I despised walking in that classroom. I didn’t take calculus my senior year so that I could avoid having another year with that teacher. But something else happened, something that I didn’t acknowledge for another 10 years. My perception of math gradually changed from “I hate this situation” to “I hate math” to “I’m not good at math.” By college, I truly believed that I wasn’t good at math and I avoided any majors that required math classes. I actually changed the whole trajectory of what I believed I was capable of because one math teacher in high school told me girls weren’t good at math. Even though I was angry and didn’t believe what he said was true, the power of his words changed the course of my life.


Years later, I took a calculus class at a community college because it was a prerequisite for a graduate program I was applying for. I aced that class. I loved it. I realized how many years I thought I couldn’t do calculus, that it was too hard. I thought about all of the doors I closed, what potential paths I didn’t take, because I thought I couldn’t be successful because of my gender.


Geraldine Ferraro is my hero. She had to have faced a million of those obstacles along the way, people who told her she was less than because she was a woman. People who wouldn’t hire her into their law firms because they weren’t hiring women. People who pushed back against her fight for wage equality. People who said a woman wasn’t qualified to be Vice President. She faced much worse opposition than a sexist high school math teacher, and she had the strength to move forward.

I remember Geraldine Ferraro when I’m ignored or marginalized. I remember Geraldine Ferraro when someone implies that my abilities are limited by my gender. And when I look at my daughter, I hope that next year, when she is 10 years old, she sees the first woman elected President and grows up trusting that she can be anything she wants to be.
Posted by Unknown at 12:13 PM