Stand up to one

At the risk of inciting the ire of the Internet, here are some truths. Daesh (ISIS) are already in the US; there's not enough security or shoe screenings in the world to keep them out. Worse, we are bombarded with terrorism from our own citizens daily: school shootings, church bombings, people gunned down while sitting in a movie theater. We don't have the systems and controls in place to secure ourselves from ourselves, let alone from some unknown villain. People love to point fingers at others, to blame other people. It's easy to blame someone else. It's so easy to fall back on fear and hate to guide decisions.


Choose love instead. There are people suffering; we should help them. That is what good people do; they look violence and hatred in the eye and meet it with love, compassion and kindness. Those are the heroes, those are the free, those are the brave. That is how we win. We stop building walls and boundaries and we reach out our hands in peace. We take loving action. It's not enough to change your profile pic or post articles of support on social media. Open your hearts, open your homes and help those in need in real, tangible ways.


There will still be violence in the world. Innocent people may be hurt or killed. We may not change every heart filled with hate. The best we can do is try to overpower it with love and lead by example. The best way to win is to represent the opposite of the hatred and violence; be stronger and more powerful in our resolve to not give in to what terrorists ultimately want to create: a culture of fear and hate that they have created, in which they hold the power. The best way to win is with love.

Yesterday evening, I saw this posted on Twitter, and responded: 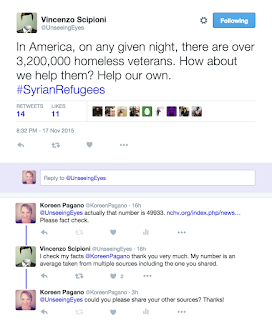 Evidently, Dr. Scipioni didn't like to have his data challenged, because here were his subsequent tweets: 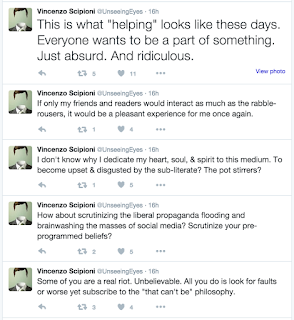 So, because I cited a source with a different number of homeless veterans, I subscribe to a "that can't be" philosophy. I have pre-programmed beliefs. I am sub-literate. A pot-stirrer. A rabble-rouser.

I actually found a few sources to back up my data. Here they are:
http://www.endhomelessness.org/pages/veterans
http://nchv.org/index.php/news/media/background_and_statistics/
https://www.hudexchange.info/resources/documents/2014-AHAR-Part1.pdf

I haven't found any sources that would bring the average number of homeless veterans on any given night to 3.2 million. So far, Dr. Scipioni hasn't provided any. I am happy to be proven wrong if anyone can provide me with data to support his claim.

This is why social media is such a toxic place: the name-calling, the bullying, the threats are allowed to happen. Misinformation is spread without anyone fact-checking, and those who try to hold people accountable to data are attacked.

Why do we allow people to behave in this way? Why do we allow this type of behavior? Aren't there more of us that can keep our conversations civil even when we disagree? I committed the grievous act of challenging uncited data and somehow I'm the problem?

If someone you worked with behaved this way, they would be fired. If your kid talked to you this way, they'd be grounded. But on social media, we allow it. And it's ruining it for everyone. Aren't there more of us than there are of them? Can't we stand up and say "this is not ok"?

When we stop challenging each other, we all lose. Don't let intelligent discourse die because a vocal minority doesn't want to participate.

Stand up to one person today. Let me know how it goes.