For better or for worse, the serious games industry suffers the same issues as the gaming industry in general. The games are typically built by young guys, and therefore the play experience is most appropriate for young guys. What about the 51% of the population that's not male?  This continues to be one of the biggest barriers to adoption that face serious games' integration into learning curriculum.

So what's different about the ladies?

Speaking in broad generalities, women interact with new environments, specifically games, much differently than men. They like to be shown what to do, and be able to practice without negative consequence or risk of failing. Men would rather just jump in and try things, more willing to learn from their mistakes. Most video games 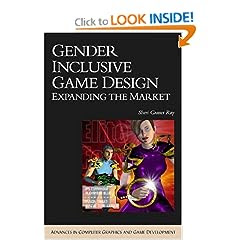 are set up with guys in mind: jump in, try things out, and when you've used up your "lives," you start over again.  For women, this causes anxiety and irritation, and accounts for the high attrition rates of women playing most video games. At GDC in Austin last year, I attended a session by Sheri Graner Ray who has also published this book on gender-inclusive game design. I would highly recommend anyone involved in designing games check it out.
For games designed for entertainment purposes, shame on them for not addressing known gender issues with game engagement. That's not to say that some progress hasn't been made. Nintendo has made great strides with Wii in designing gaming experiences that are pretty gender neutral, and incorporate many of the design strategies that attract girls to games. If you have any question, check out this somewhat disturbing video of kids overwhelmed with excitement getting a Wii for Christmas. Notice that just as many girls are excited as boys. While I think the video is a bit over the top and definitely biased, still, I was happy to see the reaction seemed to be "gender neutral."
For serious games designed for organizational learning, lack of acknowledgement of these gender differences and the absence of design that meets the needs of both types of engagement is an irresponsible waste of money. As more and more companies and organizations look to games to enhance learning experiences, it is critical that gender differences are addressed, or else risk the marginalization of women in your organization.
Posted by Unknown at 7:12 AM