Where to begin in my overview of GDC? So much I learned over the 4 days I was there, I'm just going to hit the highlights...funny thing is, its been a couple weeks, but some things still stand out. So here they are: 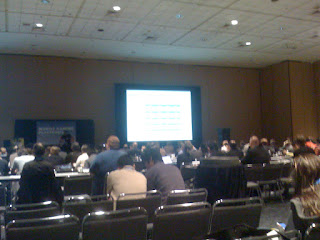 Serious games:
I was overall pretty disappointed with the Serious Games Summit track. There were some stand-out sessions; I loved the analysis of why there hasn't been a "serious" adoption of Spore. There was some good stuff in the session on the Chain Factor ARG. I was personally inspired to think about my business model by the session from Straylight Studios and their product Salon Star. But overall? Where were the technological advances? Where was all the learning data? I didn't get the sense overall from the Serious Games track that that's where the action is...and for me, it IS where the action is. 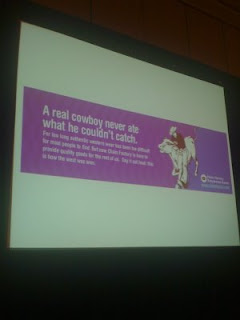 ARGs (alternate reality games):
Besides my obvious interest in virtual worlds, I think ARGs will be the next big advancement in learning/curriculum design. In fact, they may pass virtual worlds in pervasiveness because of their potential to be designed around technology instead of within it. I attended every ARG session I could. And again, wow, not impressed. OK, in defense of the ARG sessions--its REALLY new. Most of the people have done them have created something of a scavenger hunt that's tied to some entertainment media. The session that I attended as part of the Mobile Learning Summit was very focused on the technological capabilities currently available on mobile devices (or lack thereof, as the case may be). It looks like Nokia sees potential and is getting on board with advancements to support ARGs. But from my perspective, its not in the technology...its in the design. Designing for ARGs requires a completely different mindset than game developers or instructional designers or, well, anyone, has ever had to have for learning design. My prediction is that entertainment ARGs will dominate for another year or two...but eventually, ARGs will be an integral part of serious games.

Virtual worlds:
The Worlds in Motion Summit was surprisingly not that appealing in the overall offerings of sessions, at least for what I do. By far, the best session I attended was "Building your own zombie army" which was a clever way of framing engagement and using proven design features that increase people's motivation to participate. I don't want to call them psychological "tricks" but... ;) Instructional designers would do well to think about these types of features in their curriculum design to improve learner motivation and engagement, not to mention the opportunity to increase replayability for serious games.

What was the highlight of GDC for me? Jane McGonigal. Jane presented a keynote session titled: Learning to Make Your Own Reality: How to Develop Games that Re-invent Life as We Know It. You can see the slides for yourself here, but the session was a call to action for the game development community to think about how what we do can change the world, make it a better place. If I took anything away from GDC, its that what we're doing is important. It has the potential to reach beyond skill development or performance improvement. We have the opportunity to change peoples' lives at a micro and macro level. Whether or not we embrace these opportunities ultimately falls on us. But the opportunity is there. Its both a powerful and humbling message to be told you have the ability to make the world a better place. It was a wake up call that I needed to get a move on...