A love story for Valentine's Day

When I explain my current family situation to, well, anyone, I get looks of wonder, a clear feeling of "I don't know how you do that," and sometimes even pity. 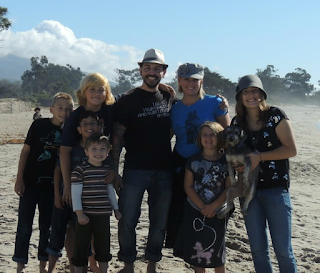 Let me tell you: My life is non-traditionally glorious because it's full of love.

Love comes and goes in your life. Family, friends...it's amazing how we all evolve together or grow apart. When I say that the last few years have been the most challenging of my life, it's because these last five years have challenged every belief I ever held about love and made me see who I really am.

Several years ago, I made a series of bad choices. Some were clearly my fault, some were guided by broken promises. My marriage to a wonderful man was failing because it turned out that the life we had built together wasn't making either of us very happy. I met someone else who mirrored every hurt I was feeling and who said all the right things to me. The timing wasn't perfect, but I told myself, "when is it ever, really?" As I ended one relationship and another was beginning, I saw an end to my loneliness in sight.

Words are easy. I was so naive, so blind in my faith in his words that I let myself circle deeper and deeper into a situation that could never end happily. The lies that he perpetuated in every aspect of his life, that I knew and accepted, only foreshadowed the depth of the lies he was telling me too. I thought I was too smart to be deceived, but I believed everything he told me. Why? Because I wanted to. I wanted to believe the pictures he painted for me with his words, I wanted to believe in the future he described, because the present was miserable and lonely. Having faith in him was directly tied to my faith that life would get better.

Over time, I lost more and more of myself and accepted smaller and smaller pieces of happiness. The final straw: a holiday weekend where he texted and called me with detailed descriptions of what he was doing at home alone, all the while he was away for the weekend and not alone. When I confronted him, he blamed me, told me that I didn't want to know the truth.

Actually? Yes, I did.

I hold myself to unachievable standards in all things, and usually that makes me spend a good part of each day feeling like a failure. It's not the rational part: I see the things I've accomplished, but more often I focus on the things that I haven't done, that I screwed up or outright failed at. There's lots of those, for sure. But this failure, this acceptance of lies and broken promises and holding on so tightly to one path to happiness, this failure broke me. It broke my heart, it broke my faith in myself, and it broke my trust in words.

So far, this isn't much of a love story, huh?

When I was at my lowest, I took a risk. I went on a date. Worse, I went on a blind date with someone I had only met online. That date could have made for a really funny anecdote of bad chemistry and deal-breaker personality quirks. Instead, it led me here, to the happiest I've ever been.

When you have nothing to lose is when you're the most honest. I wasn't looking for a relationship; I don't really know that I was looking for anything more than getting out of the house and having a drink, to be honest. On our first date, I'm pretty sure I said anything I could think of to try to scare John off. My divorce wasn't final. My ex lived in the apartment in the lower level of my house. I have three kids. I was still shaking free from that horribly toxic relationship. No matter what I threw at him, he laughed at me, somewhat incredulous that we shared such similar paths. He had his own stories, and his own three kids. We joked that I was probably a crazy cat lady, and that he was just uncovering more of my cats. We talked for hours, closed the restaurant down, and left each other awkwardly in the parking lot that night without a good night kiss. 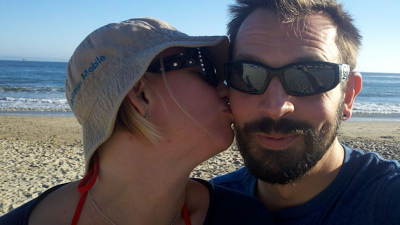 It's hard to believe that was only a little over a year ago. In the months that followed, we stayed honest about our tender but healing wounds. He did his best not to scare me off with too much attention and I did my best not to run away to spare him all of my complications. It seemed too easy between the two of us. Friendship, laughter, excellent adventures...and honesty. He always kept his word. He's got an infectious laugh and killer dimples. It took me a little time to see myself as he seems to see me. It's taken even longer for me to forgive myself for my past mistakes, no matter how warmly he embraced me and accepted them as part of who I was and who I am. Sometimes I still need him to remind me.

In a whirlwind year, we moved across the country, finalized our divorces, bought a house, started new jobs and integrated our kids. My ex moved here, found a new job, a new house...he's part of our crazy blended family too. Six kids, two dogs, my ex, John and I.

I get it. I know why people look at me in horrified amazement. 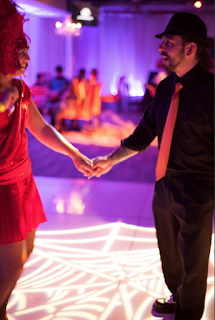 I know these things: I am loved. I have a partner who is true in all things and who I can depend on for anything. He is my constant reminder of what good looks like. I appreciate him not just for what he does but for who he is. I have an amazing mix of kids who each carry pieces of my heart and who teach me and help me grow as a mother and as a person. I laugh every day. I know what is important. I will never settle for anything less than ecstatically happy ever again.

It's an amazing adventure and I can't wait to read the next chapter in this love story.