It all started with a Sprite (Happy Anniversary)

Three years ago, Presidents Day was the eve of what (besides being a mom) has been the greatest adventure of my life: starting Tandem Learning.

Becoming an entrepreneur is very much like becoming a parent. You know your life is going to change, you just can't imagine how, and no one can prepare you for it.

One thing I didn't anticipate at all 3 years ago was finding the resilient partnership and friendship with my business partner, Jedd Gold.

Jedd wasn't part of Tandem from the beginning; I met him a couple months later at the same conference where I first "discovered" virtual worlds. I had flown to New York City from Orlando, where I had just attended a large client event. There had been several days in a row of going out drinking, and having flown into NYC by myself, knowing no one at the conference, and being able to count the number of female attendees on one hand...I decided that it was going to be a dry conference for me. After the first day of the conference, one of the virtual world development companies was hosting a kegger. (Yes, a kegger on the Expo floor. I know.) I didn't know anyone but I wasn't particularly eager to go spend the whole evening in my shoebox of a hotel room, so I hung around, looking for something non-alcoholic to drink. I asked the bartender (or more appropriately, The Kegkeeper). There was no water. There was no soda. There were a lot of guys in their early 20s drinking beer out of plastic cups.

One of the other women at the conference spotted me and came over to introduce herself. We were lamenting the lack of options of beverages when a guy came up to me, having clearly overheard our conversation. He said, I'll get you a Sprite. I replied, sorry, I already asked the bartender...there's nothing but beer, but thanks for the offer.

He said, I'll be back with a Sprite.

I don't know how Jedd did it...we watched him approach The Kegkeeper and a few minutes later he returned with two cans of Sprite and two plastic cups with ice. I was impressed (I now know that this isn't unusual for Jedd...he has a knack for making things magically happen). We exchanged business cards and made plans to talk after the conference about how our companies might leverage each others' services.

I'll admit, after the conference I blew Jedd off for awhile, somewhat for good reason (my emergency appendectomy) and in some part because I thought that he was just another guy looking to pick up development work for the company he was working for. Finally, we overcame our time zone issues, health issues and scheduling issues...and after a conversation that would change both of our lives, I realized that I had found the business Yin to my Yang...and here we are, three years later.

I've been fortunate to be able to work with some of my favorite people in the world over the last three years and we've traveled an interesting path. But today, I want to thank Jedd for being my rock, my biggest fan, my conscious, my editor, my manager, my critic, my friend...for not freaking out at the same time I do and for always keeping things in perspective. We have miles left to go, and I'm happy to be traveling them with you. Thank you for the Sprite.
Posted by Unknown at 2:55 PM 0 comments

What IBM Watson means for learning, education, and instructional design

During the NFL Playoffs, I started to see IBM's commercial for Watson. I was interested for two reasons...first, it didn't seem like appropriate placement for the commercial (my sister used to be a media buyer so I peripherally know too much about commercial placement) and secondly, I was having a hard time caring if a computer could answer trivia questions faster than a human. 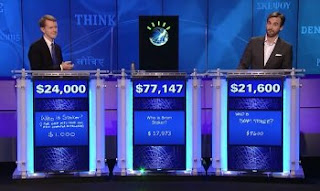 OF COURSE we've gotten to the point that a computer can beat Ken Jennings at Jeopardy. Isn't that what we've been working towards, since the beginning of computers? Haven't we been trying to get computers to handle sifting through large amounts of data and finding the correct answers at a much faster speed that we humans could do? Haven't we been trying to alleviate our burden of determining complex logic algorithms that lead to a "correct" answer? For questions that have a correct, single solution or, even for questions that clearly have a best answer, we have finally developed a computer that can more quickly and accurately come to that answer than most, if not all, of our brains can handle.

The irony in IBM Watson being such a revelation is the juxtaposition with educational trends, specifically an increased emphasis on standardized assessment and testing. Just today in my Twitter stream, I'm seeing tweet after tweet about the US government's multi-billion dollar funding of "Race to the Top" and the emphasis on making our educational system more competitive with other countries on standardized tests. Guess what, everyone? We have actually built computers to do the work that standardized tests test for, better than we are able to do it.

So, what do we value? Do we want to continue to beat our heads against our own technological innovations and try in vain to measure ourselves against systems that will always be more efficient at performing the tasks that they are designed specifically to do? Or should we be thinking about what we, human beings, can do that no computer can? What makes us human? What makes us different from a machine?

We are emotional, creative, intuitive...we can solve complex problems with no clear right answer. We are social and thoughtful and we strive to create meaning where it doesn't currently exist. We are complex and complicated and messy and funny. Yes, we can be logical and systematic and we can memorize and recall our address where we lived in when we were 6 years old (6521 Ralston Rd, btw), but we can't always remember where we put our car keys.

I hope we never create technology that is so perfect in its humanity that we lose our own. For now, we've developed a technology that does something important: answers certain types of questions, faster and more reliably than we can. So let's stop focusing on trying to train our brains to work like IBM's Watson and instead focus on training our brains to handle the types of thinking and work that Watson can't. Let's stop focusing on standardized testing as the measure of educational success and let's focus on how we can get students to solve complex problems. Let's make sure they understand history...not so they can recall dates and names on demand, but so they can understand how the decisions of the past have led us to where we are and we can learn from the lessons of our collective history.

Let's reward risk-taking and innovation and bravery and determination. Let's instill lessons of compassion and responsibility and community and resilience. Let's facilitate communication and empathy and love. Yes, I said it: love. Let's start educating people, young and old, as people...not training them like computers or like cogs in the system. Let's think about education as a way of making us more human, not more like computers. 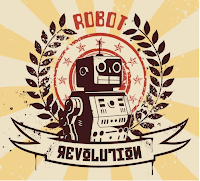 That, in the end, is what will save us in the Robot Revolution. In the meantime, I call Watson for my team in Trivial Pursuit.
Posted by Unknown at 12:13 PM 4 comments